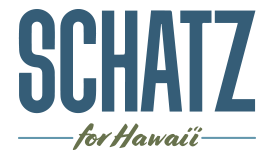 Senator Schatz is dedicated to representing our values in Washington, delivering federal resources to Hawaii, and giving all of our families a fair shot.

Since joining the Senate in 2012, Senator Schatz has focused on making sure Hawaii gets its share of federal dollars, while tackling some of our country’s biggest problems. Working with both his Democratic and Republican colleagues, he has passed laws to help us fight the pandemic, rebuild our economy, expand access to health care, help reform our criminal justice system, and improve benefits for veterans.

In 2019, Senator Schatz was named Chair of the Special Committee on the Climate Crisis. Under Schatz’s leadership the committee developed a comprehensive report on the urgent need and potential economic benefits of bold climate action.

Brian grew up in Hawaii with his three brothers Jake, Ed, and twin brother Steve, raised by their mother, Barbara, and father, Irwin, who was a professor at the University of Hawaii John A. Burns School of Medicine for more than three decades.

Brian’s wife, Linda Kwok Schatz, is a businesswoman. Together they have two children, Tyler and Mia. Linda’s parents, Ping and George Kwok, who ran Kwok’s Chop Suey on Waialae Avenue for 35 years, also live with them.

Senator Schatz became involved in community advocacy when he was inspired to join the Save Sandy Beach movement in the 1980s. He later served as the founder and Executive Director of Youth for Environmental Service, CEO of nonprofit organization Helping Hands Hawaii, and Chairman of the Democratic Party of Hawaii.

Senator Schatz previously represented the 25th District (Makiki, McCully, and Tantalus) in the Hawaii State House of Representatives from 1999-2006. He won a competitive statewide race to become Lt. Governor of the State of Hawaii in 2010, which he served as until being sworn in to the U.S. Senate.