Aug. 10 — Hillary Clinton is surging not only in national polls but also in key swing states—and that is good news for a bloc of Senate Democrats who hope to put climate change back on the front burner and fill a vacuum of leadership triggered by the departure of once-towering Senate figures on the global warming issue.

Control of the Senate was already up for grabs, given Republicans who now hold a 54–46 majority must defend 24 seats; Democrats are defending only 10. Clinton, the Democratic presidential nominee, has opened a post-convention lead of as many as eight points in national polls, but more crucial to Senate Democrats is leading in multiple swing states they need to capture Senate control. 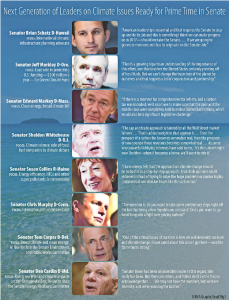